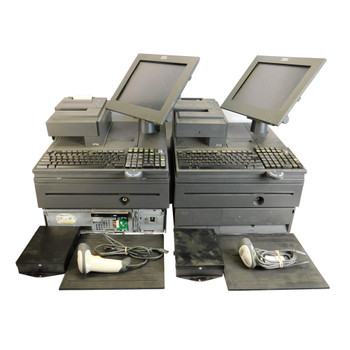 Condition: Used. Comes in non-original packaging.  These IBM POS Systems are in good cosmetic condition with some scuffs, scratches, and minor housing damage, but nothing too significant that it would affect functionality.  In particular, system #1 is missing the front cover to the Computer and system #2 has a cracked out portion of the computer housing where the front cover tab connects to the housing and is missing a small door on the back of the display.  We do not have Keys for this system. The photos show the exact item(s) the buyer will receive.

Notes: We wired up both of these systems and started them up to the point where the operating system began and the proprietary software launched.  Because we were unable to log into the system as an operator we were unable to test further.  Additionally, we were unable to open the cash drawer because we do not have a working Key.  Finally, we wiped both hard drives on both systems.  No further testing was performed. No manuals, cords/cables, or additional items are included if not listed or shown.